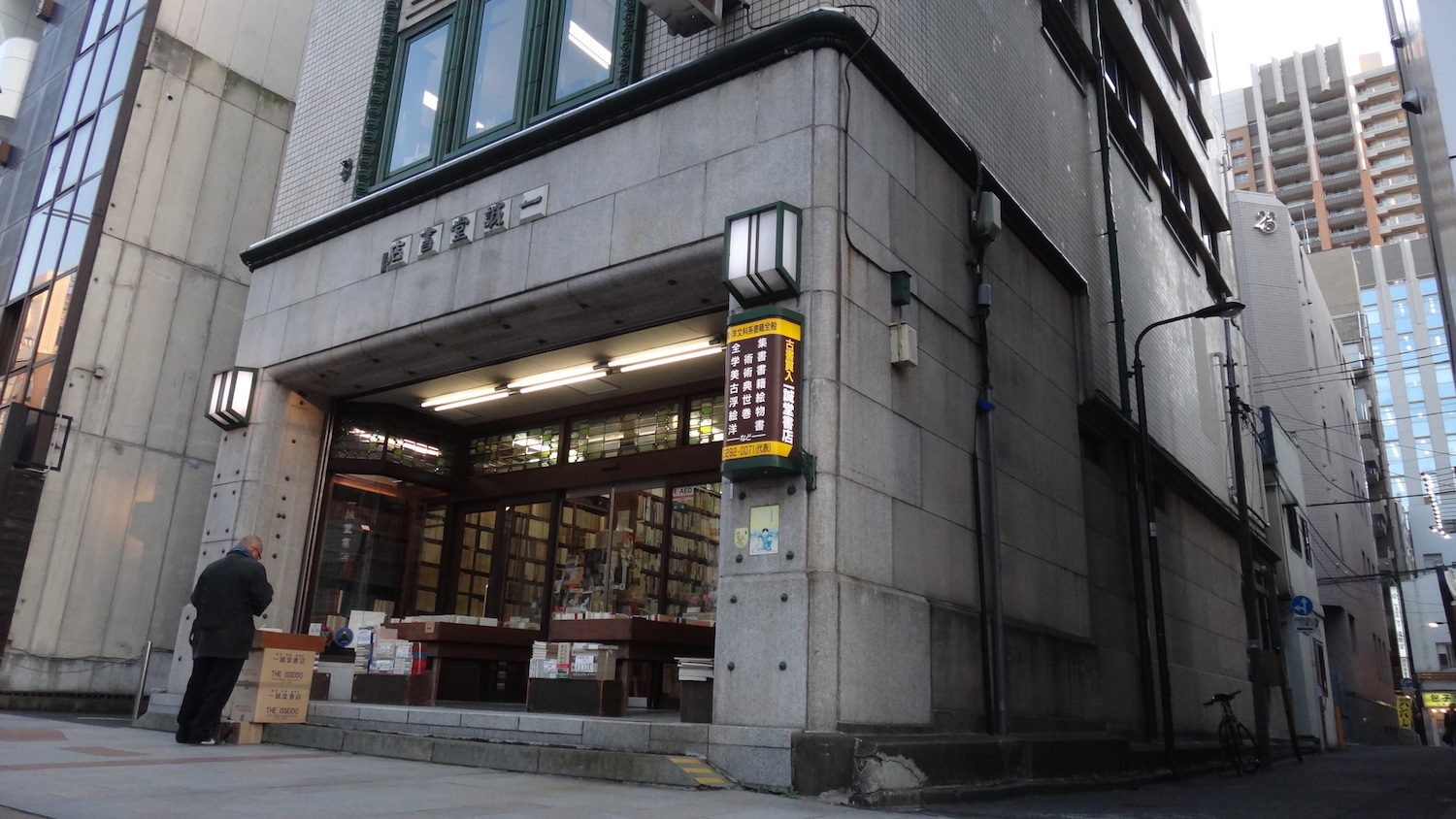 An updated version of a blog post I had done in February, 2016. 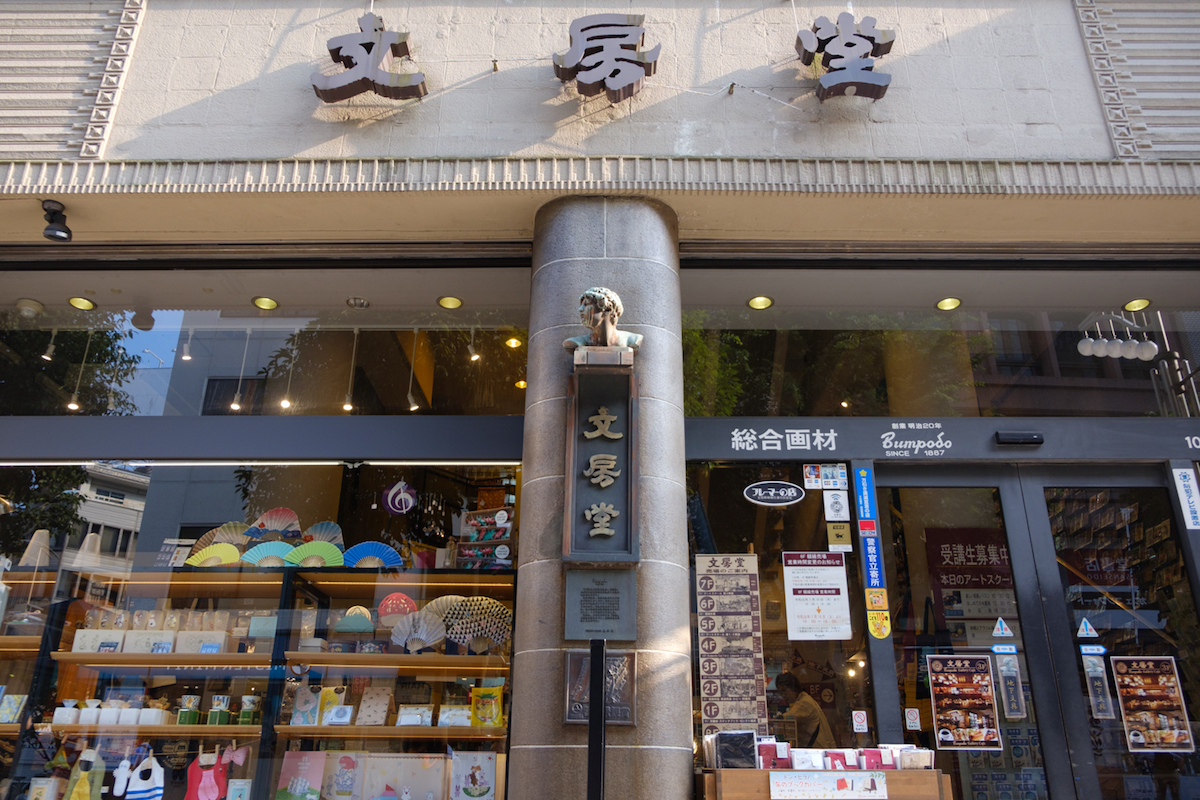 Tokyo’s “Booktown” crams 200 bookstores within a 15-minute walk radius, about 1/3 of Tokyo’s all second hand bookstores. It’s a cultural pocket from the Meiji Era has everything from the 100 Yen manga books to thousand dollar collectible antiques. Whether you have an hour or a whole day, check out a few in the list below, then follow the red pins to local restaurants on the map (because it is a source of great student-budget eats).

Note: Pins in green are book stores and pins in red are restaurants!

You’ll find the stacks of used books if you hit up Yasukuni-dori and Hakusan-dori and just wander every little side street to see what other little shops catch your fancy. The area starts just north of the Imperial Palace and skirts along the edges of Iidabashi’s eateries. Tokyo’s university ghetto is surrounded by Hitotsubashi, Meiji, and Nihon, Chuo, and Senshu University and has a town of bookstores, eateries, and sports shops to serve students and academics alike. 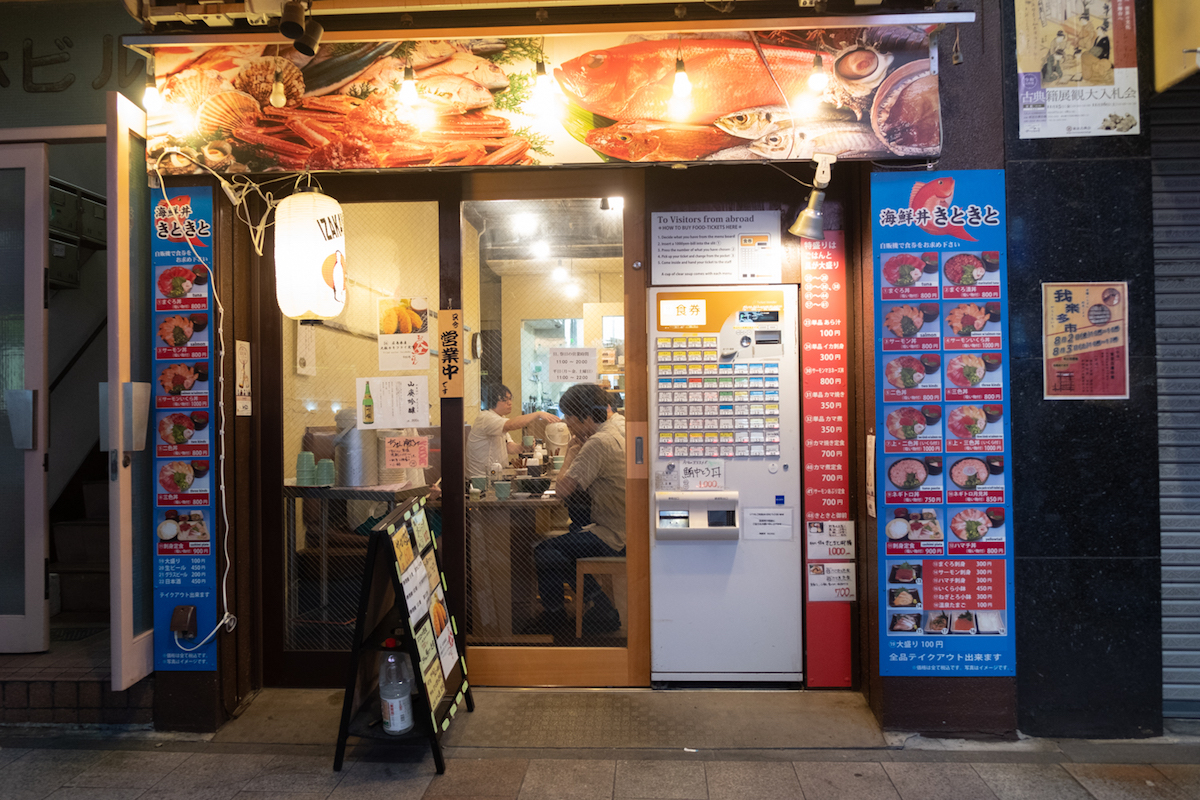 This second hand book area hails from the Meiji Era around the 1870s. Initially the resellers specialised in law books and collectible books to meet the demands of the new universities, but quickly diversified in stock and numbers to meet the universities’ growing needs. Many venerable shops will have establishment dates from the 20th or even 19th century, but have gregarious 1970s facades. The Great Kanto Earthquake of 1923 levelled many shops, but even the ones that survived would have been burned during Tokyo’s fire raids in World War II. They have since rebuilt and vary in size and style, and specialties. Jimbocho is one of my favourite places in Tokyo and an area I return to often. This list and map have been updated last in 2020.

This is one of the most successful bookstores out of Jimbocho and is now a nationwide chain store. This is the flagship store, still in the heart of its community beginnings. Its multistorey building begins with a lifestyle section on the first floor, with English books on the 5th floor.

Right beside Sanseido is a relatively younger establishment, founded in 1945 just after World War II. It has English novels and academic books, German books and paper backs.

This is one of the founding fathers (unfortunately, women didn’t open bookstores then) of Jimbocho, and still carries books all the way back to the Edo era. Definitely go and check out the old maps of Japan and antique books.

Tokyodo began in 1890 as a small bookstore like many of the other businesses around. A year later, they started doing publishing as well. After the great Kanda Fire that leveled most of the area, they built a new modern building, which was finished in 1913. The current company was formally registered in 1917. The current store, has a chic modern look that caters to every interest. Beginning with its magazines on the first floor, you can work your way up to the history, religious, and foreign books. Best of all, its Paper Press Cafe serves 180 Yen coffee with unlimited refills and free WiFi. Sit down with a view of the street to work or people watch for a bit!Check the gallery at the bottom for a facade of the store.

Established in 1887, the stationary store is a modern 4-storey affair. It has daily staples in the basement, a rotating gallery of cultural items on the ground level, a great selection of postcards and paper on the second floor, and an upstairs gallery and cafe.

This place is officially a gallery for kids books. However, it’s worth popping in to get the free maps of the neighbourhood, usually around the entrance area.

Komiyama, established in 1939, during Japan’s imperialist expansion era, the store has since thrived to become not only one of the leading photography, art, philosophy and literature bookstores, but also a rotating gallery on its 4th to 6th floors.Check the gallery at the bottom for a facade of the store.

Hailing from 1904, Tamura Shoten specialises in French and German literature from the 16-20th Century. They have English books on the second floor.

Isseido Shoten has not only survived a century, it’s one of Jimbocho’s surviving landmarks after World War II, where American fire raids burned most of Tokyo to the ground. The austere standalone building was completed in 1931, desgined by RC5. The first floor has gorgeous collectible prints from the Meiji and Edo periods in the glass cases, and the upstairs section has English rare and academic books worth checking out.

Check the gallery at the bottom for a facade of the store.

Iwanami Shoten in addition to being an established bookseller, is also a printing house that has affiliations to some of the university faculties. Most of their titles are in Japanese, but you shouldn’t miss its second floor Art Postcard Gallery and Shop KYOTO BENRIDO, with one of the finest postcard collections in the city. It’s a great place to get a unique design to send home!Iwanami Shoten is also associated with the publishing house, which published the quintessential book *Japan’s Emergence as a Modern State: Political and Economic Problems of the Meiji Period *by Canadian diplomat Herbert Norman, who was born and raised in Japan in the turn of the 20th Century.

Check the gallery at the bottom for a facade of the store.

The Kanda used Book Centre is easy to miss, given all the books laid out on the street surrounding it. However, if you head up the stairs, you’ll find an unusual selection of options. The first-floor bookstore has many cultural books, such as Noh, Japanese History, martial arts, and cooking. The 2/F has manga and illustrated books. The 3/F is for books related to animals and the environment. The 5/F has books on eastern medicine and spirituality and also has Miwa Bookstore (est. 1978), a kids bookstore (used & new books). The 7/F has Izawa Shorin, Jimbocho’s largest medical bookstore, and a bookstore selling special interest, history, literature, music, fashion and photography books. the 9/F has Haga Bookstore, and the 9/F has Fuji Records.

Established in 1918, with the current structure built in 1928, Yaguchi Shoten is living relic of Showa architecture. Even though the exterior has remained frozen in time, the shop sign nothing more than plain text, its years of experience selling books on cinema, theatre, and the arts means it has an unparalleled selection crammed into its shelves inside and on the street.

Established in 1902, Kitazawa is one of the oldest bookstores in the area and has a unique classical atmosphere with its stairway and lamp post inside the entrance. Its entire second floor housing an impressive – mostly academic – English collection ranging from East Asian and World history to English literature and philosophy. It also has other foreign language books, such as German and Spanish. The first floor is Japanese, and has mostly kids books. There are some English titles as well.

A little shop that has lots of retro magazines, manga, and movie posters (including Western ones) that can make great ¥100 souvenirs.

@Wonder is a relatively young addition to the Jimbocho shops, but sets itself apart with its second floor cafe, where you can work and have lunch or coffee. This second hand bookseller is one of those tiny first-floor places that has its wares spilling out (neatly) onto the side alley in virtually permanent bookshelves. The book collection ranges from Sci-Fi, sports, manga and contemporary novels and topics to more historical books and older prints.

Established in 1930, Ogawa Bookstore specialises in British and American literature. They have academic and rare collections. They also have an inventory of rare/limited print Western books on Japan, philological works, dictionaries and grammar textbooks. They had a durastic change in the 70s, switching to retailing used books. They also specialise in selling Western magazines such as ELLE, Playboy, Time, Life, Vogue and Harper’s Bazaar.

Bondi is an established favourite amongst expats, who enjoy the photography books and wide English selection.