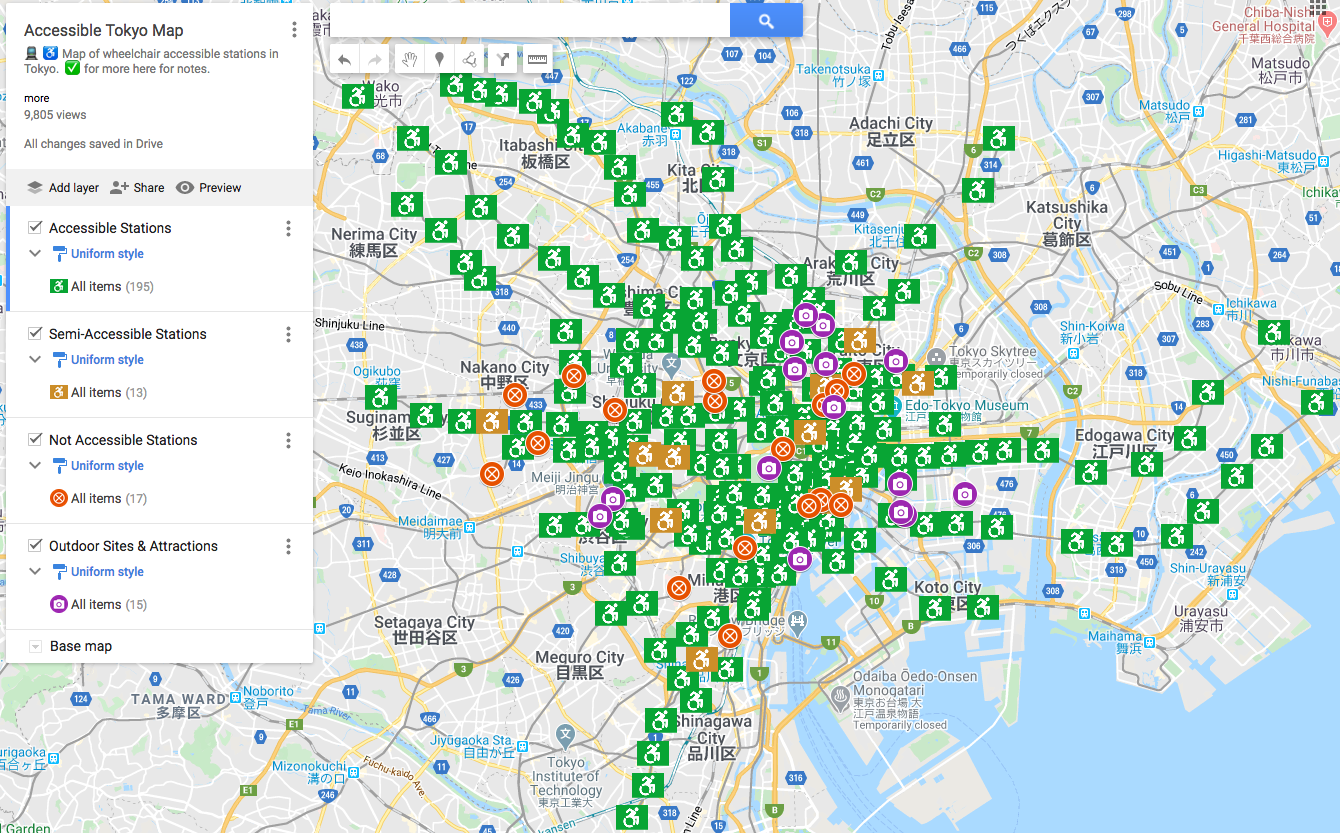 This is an archived post from April, 2016. It is no longer actively maintained. 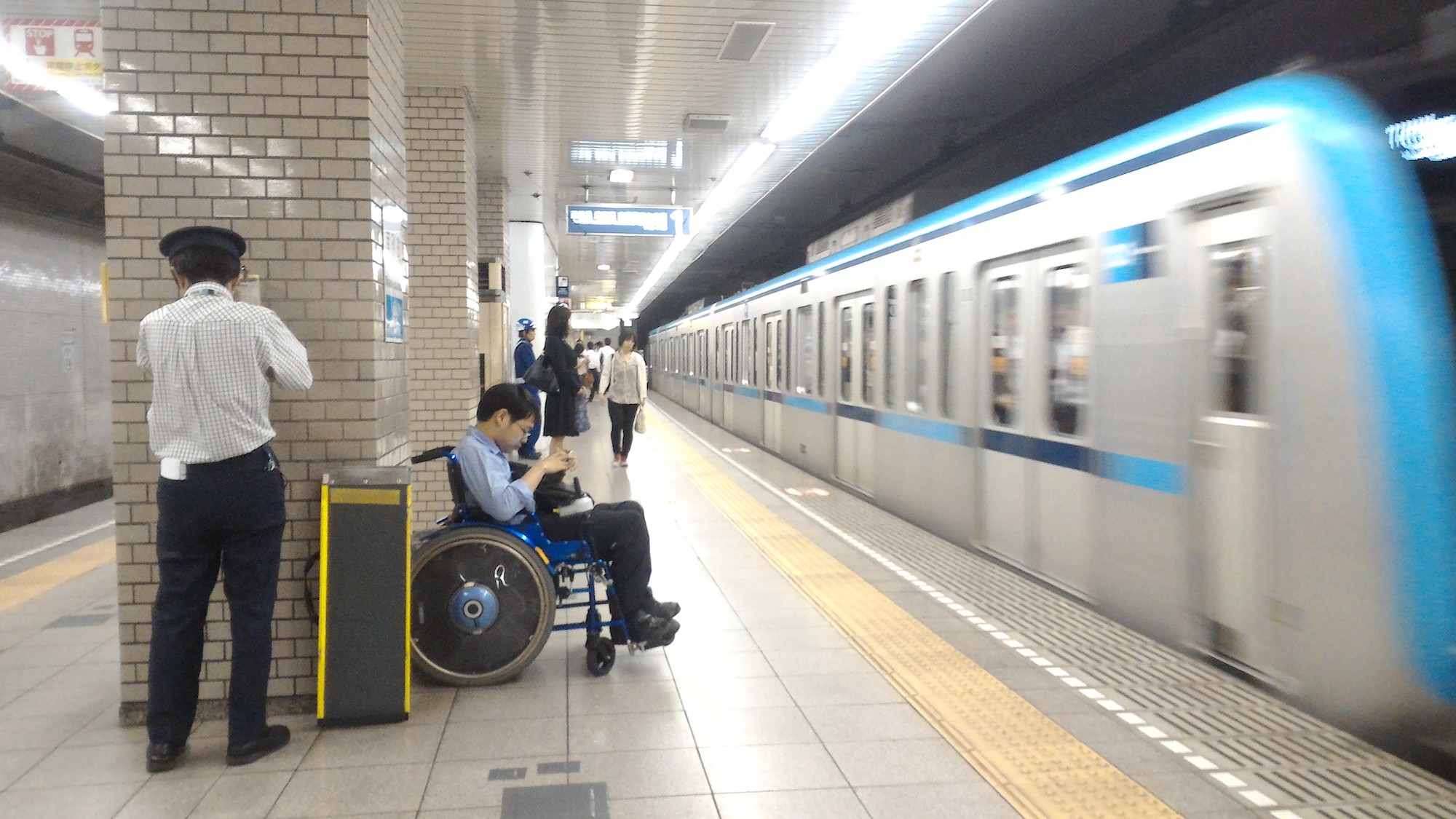 A station attendant waits with a passenger to help him get on the train in Tokyo.

Tokyo’s an incredible, and potentially overwhelming, city that should be experienced first hand. As officially the most populous city in the world, it is incredibly complex. It has over 225 stations in its 23 Wards and over a million people in transit every day. Still, the city is more accessible than it seems. Stations often have washrooms and lifts, and so do department stores and buildings. The information is a bit scattered, but out there!

This guide is designed to provide general information on accommodation, getting around, and some accessible sightseeing locations specifically in Tokyo. It also includes some basic phrases for you to ask for help. Any errors are my own, and please let me know if you have any tips! 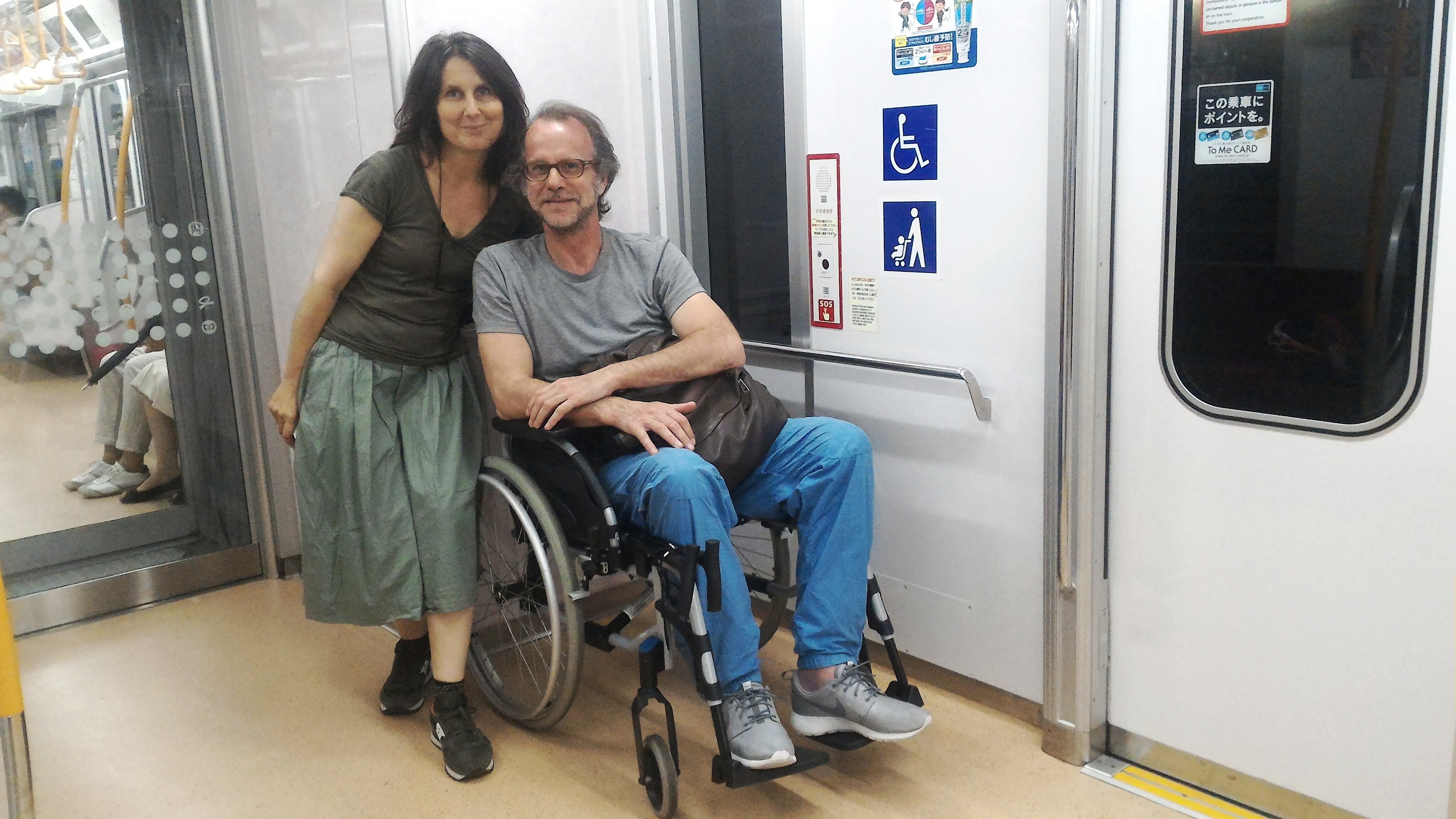 *Met this French couple on the train to Asakusa!**

People in Japan are often polite and helpful. However, many also do not speak much English. If you can explain what you need, they often go out of their way to help you. If you have a smartphone, it’s best to bring a translation app such as Jsho for Android or Yomiwa for the iPhone.

All assistance counters and reception people are there to support guests. They’re your easiest go to for help. In addition, store staff are also there to help. 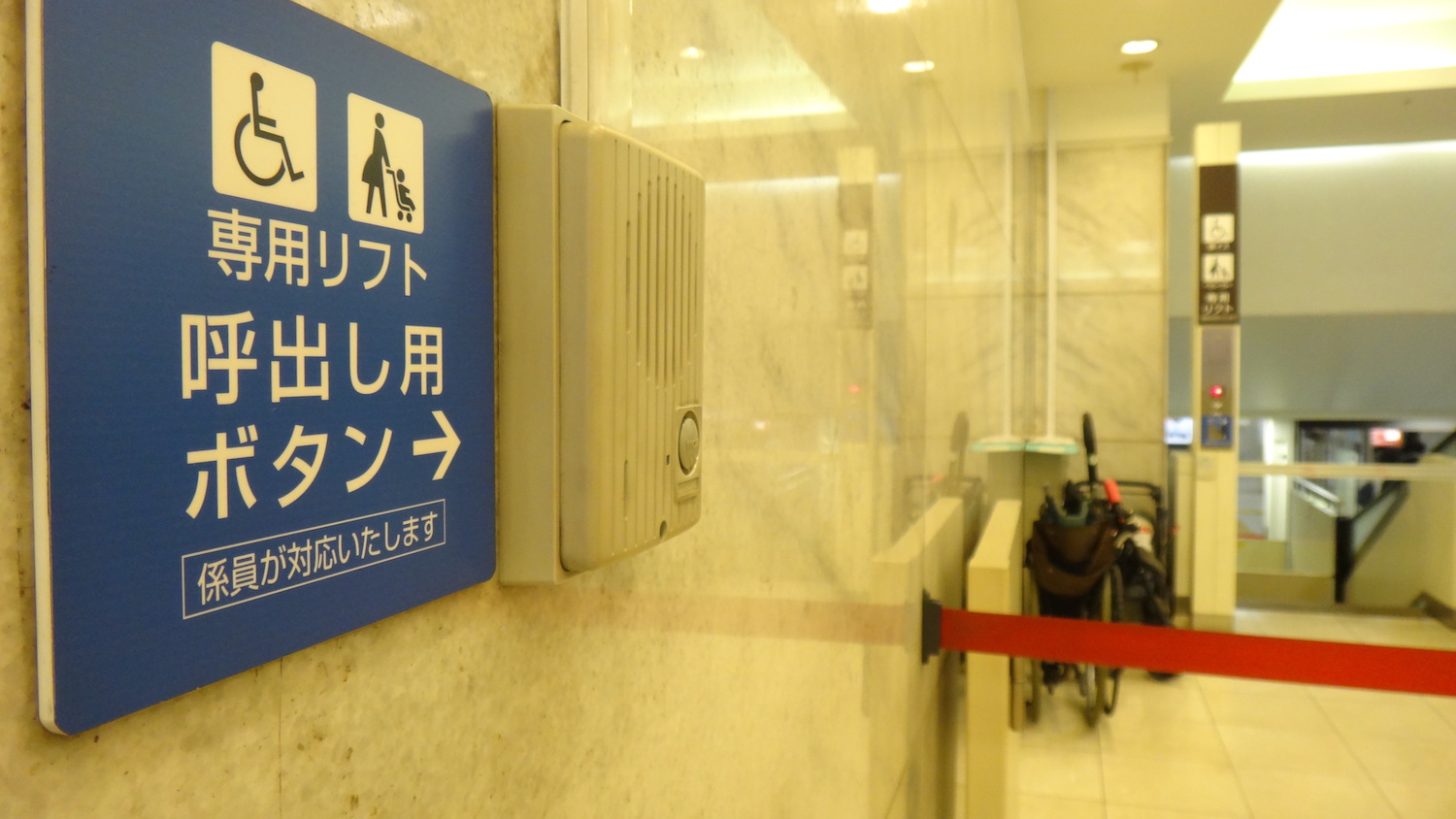 While most hotels are accessible at the entrance, the major problem for hotels in Tokyo is having accessible washrooms (i.e. with roll-in showers). Many hotels may not, but the bigger barrier is usually language. When contacting potential hotels

The other option now is to use AirBnB, and select ‘Wheelchair Accessible’ in the filters. I’d also suggest you choose a host that has good reviews for responsive service and lives in Tokyo.

As a tip, if you are travelling in Japan and e-mailing or phoning you can use the questions below: 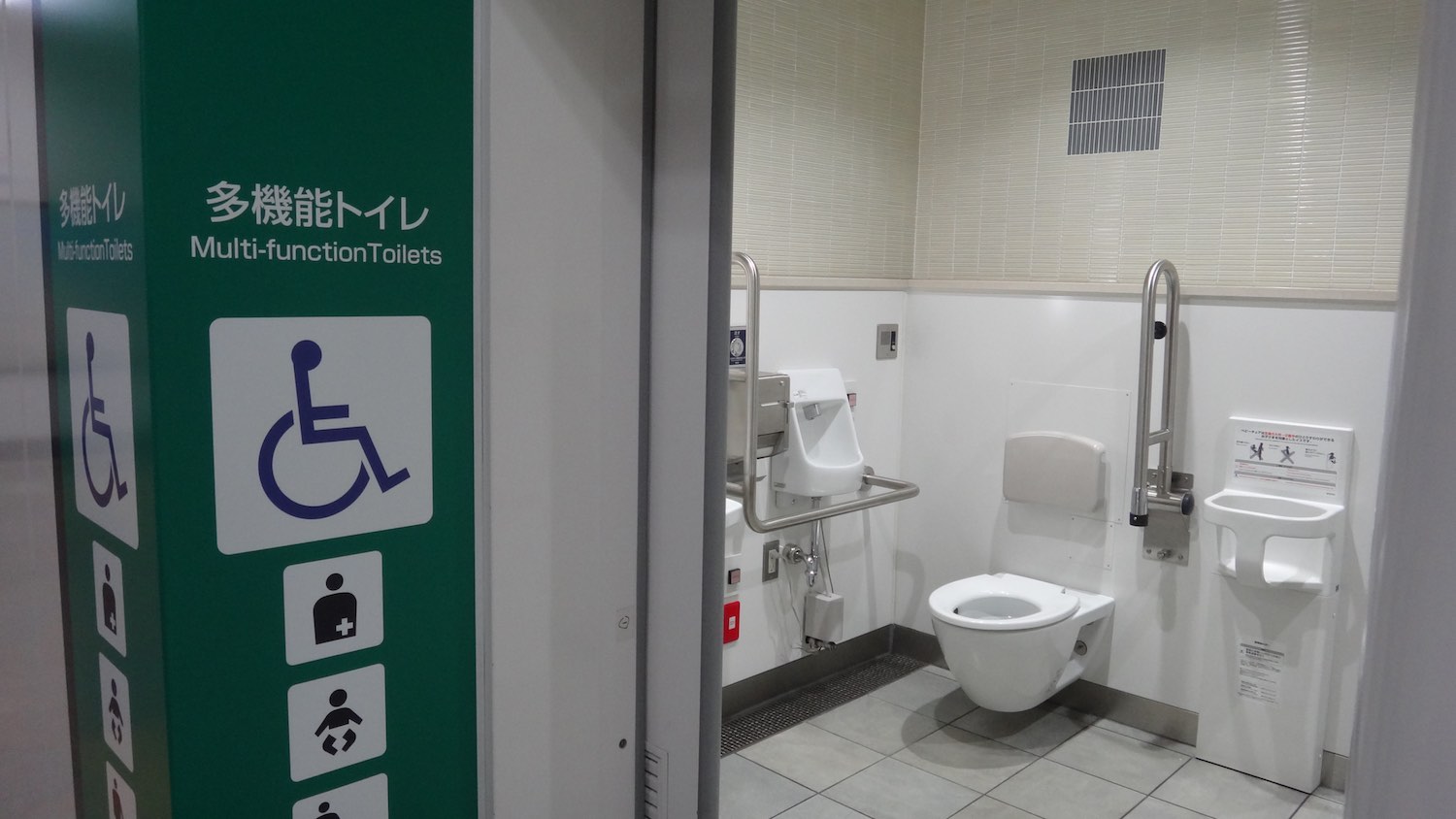 Tokyo and Japan in general has a good number of spacious, accessible toilets. Most train and subway stations have them. Department stores and newer malls all have them.

If you need to find a toilet, here are some useful expressions:

Where is the toilet? トイレはどこですか？ *toireto wa doko desu ka? *

Even though Tokyo is quite complex, even for locals, it has some useful design elements. For example, central areas often have:

The general challenges are

Useful phrases would be:

Excuse me. Where is the lift? すみません、リフトはどこですか？ *sumimasen, rifuto wa doko desu ka? * 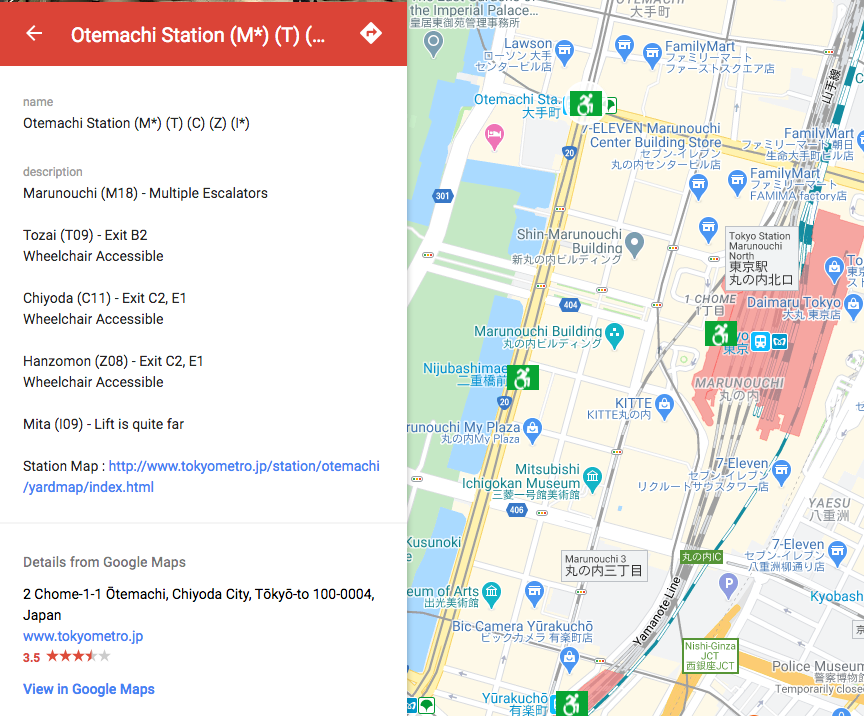 Note that Tokyo has several train and metro companies. In addition, the trains that come into the Tokyo metropolitan area double up as the metro trains as well. For example, if you are coming in from Haneda Airport, the Keikyu private train line becomes the metro when it reaches the beginning of the Tokyo metro map (click on link to see), but travellers do not necessarily need to get off if the train continues through the city. Don’t worry if you get the wrong ticket: a station attendant can always help you adjust the fare at no extra charge.

Staff at the train stations can assist people with to the train. The major challenge is language. They also normally provide a ramp to get on and off the train as there is a gap. You can ask an attendant at the station, but might save some time if you phone ahead. Below are the numbers for two major train companies with an English service:

Some public buses have low step and wheelchair accessibility. However, the bigger challenge with buses are the local routes and unintuitive stops. I would not recommend taking buses unless you have at least conversation-level Japanese and can read the Kanji station names.

The following resources are helpful for planning journeys:

Marked parking spaces are required by law and can be found in most car parks.

Buildings, Restaurants, and Eating Out:

Many independent restaurants, bars and cafes have steps at the entrance. Many higher end restaurants may also have a genkan, an entryway where one takes off one’s shoes before stepping up into the building. Unfortunately, these are mostly inaccessible.

Many of the tourist attractions in Tokyo have designated accessibility features. Many of the attractions are also shopping areas, such as Shinjuku, Shibuya, Roppongi, Odaiba and Oshiage Skytree. These stations have accessible exits, which you can see in the Accessible Tokyo Map. The main challenge is navigating through the complex stations and all the people. Be sure to look at station maps and plan your route.

Below are some links of sights to visit:

For more information, you can also check out the Japan Accessible Association.

You can also check the Tokyo Metro website for barrier free station information, including washrooms.