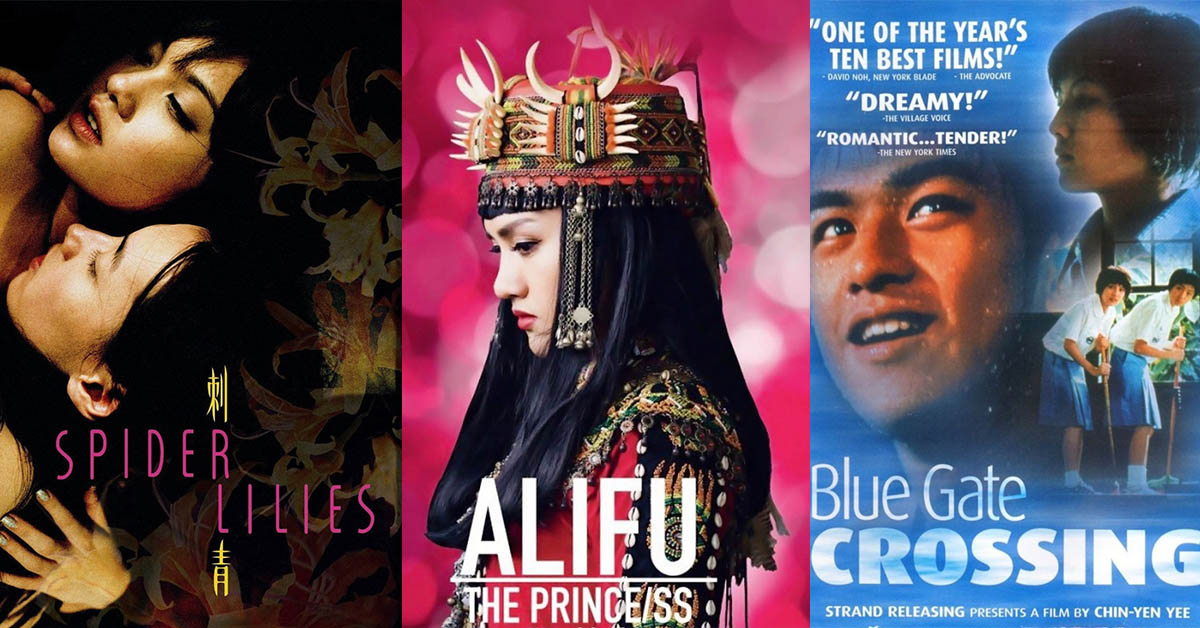 This post was originally posted on my old blog in October 2018. I’m sure it’s dated and has plenty of formatting errors. I’ll try to update my commentary and add any updated stuff I come across. Feel free to DM me on Twitter if you have a link to share or directly create a PR on GitHub.

This Taiwan LGBTQ content post mushroomed out of an ill-fated attempt to update “cultural media content” for Hong Kong. I had thought I’d just toss in all the content for the entire Greater China Region (Hong Kong, Taiwan, and China), as if 1/6th of the world’s population didn’t have enough to LGBTQ stories to tell on screen. Needless to say, I fell down the Taiwan rabbit hole. This post aims to to introduce LGBTQ Taiwanese movies, TV shows, podcasts, and vlogs for people who want to see, or listen to discussions by, Taiwanese queers on their lives and contemporary culture. 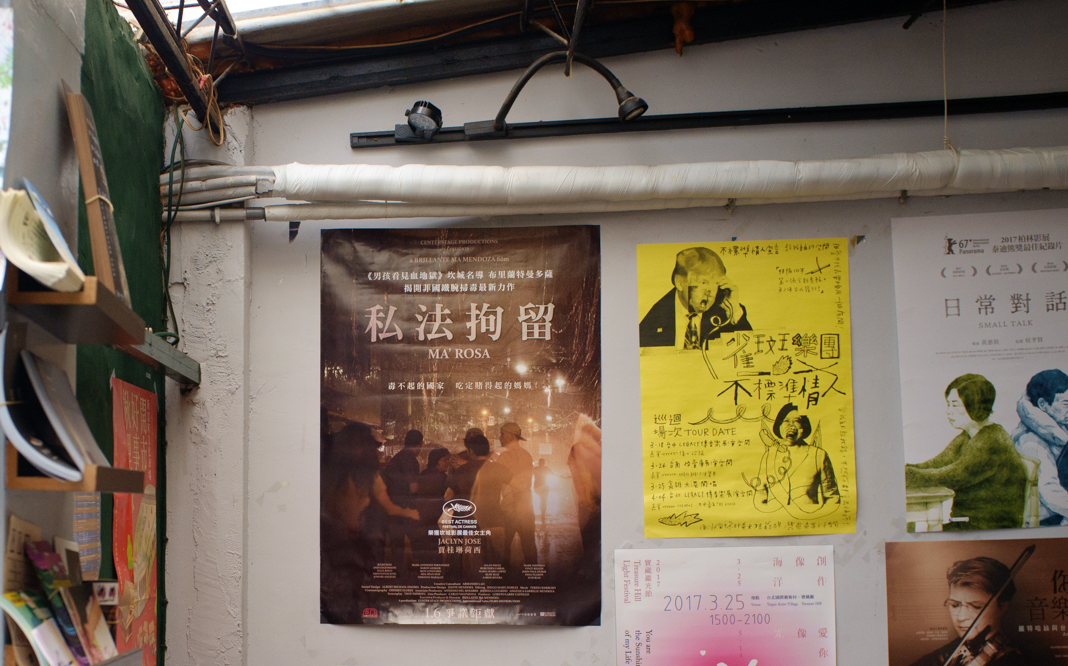 Generally, I think Taiwan has the most LGBTQ cultural and media output given its relatively small population combined with its relatively open government (on this specific topic). Taiwan has had a long history of activism and also became the first Asian country to legalise same-sex marriage in 2017. Taiwan has been producing queer content even before the 1990s, from overtly lesbian books like Notes of a Crocodile by Qiu Miaojin to movies like 喜宴 in 1992. The country also has out icons such as director Zero Chou (周美玲) and her partner Hoho Liu (劉芸后). You can also find interviews with other out people here with English subtitles: author Chen Xue (陳雪), Chen Kehua (陳克華), Jin (戴安娜), Youjen (又仁), and Luo Yujia (羅毓嘉).

Speaking from a personal Chinese Canadian perspective, I found queerness in many Chinese movies I watched growing up (more on that in a Hong Kong post). By the early 2000s, when internet speeds were fast enough to share movies, there was also easier access to queer movies in Asia. For some reason, I feel like there is a higher ratio of content for queer women (whether lesbian or bisexual) as compared to North American cinema, but it could also be selection bias. I also personally find that the stories tend to touch on topics that intersect with queerness, whether it’s being an immigrant, or poverty, or or family issues. I think for Chinese and (East) Asian Americans, there will be resonance in seeing how characters communicate, behave, and are introduced through an Asian director and cast.

If you are in Taiwan, then check out the Taiwan International Queer Film Festival series, which takes place in the Fall and has events throughout cities in Taiwan. My understanding is that the major ones are in Taipei, Taichung, and Kaohsiung. In addition, I saw Changhua, Nantou, Jiayi, Taoyuan, Tainan, Hualien, Hsinchu from September – November 2018.

Caveat: I haven’t watched as many Chinese (queer) films in recent years, which means there are many classics missing from my list, but you can check out the Chinese Wiki List, which is quite comprehensive.

Some context for international readers

The first thing to note is that most content is in Chinese, without the convenient English subtitles that Hong Kong often has. This means that searching in the right Chinese terms will be helpful. Below are some search terms that you can pair together to find what you want, but Google results aren’t as accurate for searches in Chinese from what I’ve found:

Some of you will notice that many of the movies I’ve listed above *Spider Lilies (2007), Drifting Flowers (2008), The Substitute (2017), and We Are Gamily (2017) *are directed by Zero Chou, who’s the only out lesbian director that I’m aware of in the Greater China region. The target cities crosses borders between 6 Chinese cities to tell queer stories in each of them: Beijing (The Substitute), Chengdu (We are Gamily), and the upcoming cities of Penang, Singapore, Hong Kong, and Taipei.

English subtitles at this link. It is also available on Amazon! This romantic comedy has a gay, lesbian, and interracial relationship. Interestingly, though it is a Taiwanese production (director, cast, basically everyone I think), the movie is set in Chengdu, China. For the women, the Youtube spoiler scenes of Wu Ruo & Yang Duo on YouTube are here: 偽婚男女 武柔 (李京恬) X 楊朵 (程茉) 之愛情故事啊 ( [Wu Ruo X Yang Duo]).

Again, this is not an exhaustive list. You can find additional movies from the 1990s and early 2000s on this Chinese Wiki List.

Most of Taiwan’s LGBTQ Youtube channels only have Chinese subtitles as it’s for a domestic audience. Some of the episodes or shorts have English subtitles as well. Your best bet is to copy the Chinese name and then type in “English” beside it for a show that interests you. The channel that does have more English would be GagaTai and LalaTai as they have more resources. **Disclaimer: I am not a Youtube watcher, ** so beyond a brief skim of some episodes, I cannot vouch for the quality of content. Please do let me know if you have other recommendations or corrections!

** 【 LES LOVE 】台灣首部女同志拉子偶像微電影 (Full Video — Chinese & English subtitles)** This is the original web release for the short video (13 mins) that was released by Ben&Dry.

Ben&Dry (Lesbian / Queer women) One of the hosts featured in Les Love (2018) short film and principle behind the lifestyle brand TandG.

女人國 LEZS TV (Lesbian / Queer women)This podcast interviews queer women in Taiwan and their stories. The videos are an offshoot of the events called Lesz Meeting, an event / girls party that has been running in Taiwan since 2005.

逼逼日記 BBDiary** (Lesbian / Queer women)** no longer exists, but I wanted to leave this here for posterity. The account still has 46,000 followers.

A vlog for a Taiwanese queer couple, Huan and Amber, in Taiwan who got married in 2017.

The host discusses everything from Taiwan’s gay marriage to the 5 lesbians you’ll meet in school. It’s quite informative and very entertaining.

TA們說 / 超自然震動LGBTalk SHOW This is an LGBT talk show on a range of topics. Some of it explains LGBT culture to a general audience, but a lot of it is also mostly (it seems like) gay content for a male audience. Note that the content has evolved a lot over the years from discussions, to news summaries, to what seems like TV show clips. Just going from the titles, I would say that there seems to be a decent number of more recent episodes dedicated to trans (跨性別) topics narrated mostly by the host Viva. I’ve included some links here for sampling various topics:

Gaga & Lala Tai (Gaga & Lala Channels) The two channels are under the GagaooLala umbrella — one for men and one for women. The Lala channel includes content such as “Out People”, interviews, events, etc. Below is an example of the Queer Taiwan (酷兒台灣) series done by Gagaoolala. This interview follows Leon and George and their razing their kids. Unfortunately, there are no English subtitles.

Over the Rainbow As far as I understand, it’s a film / media movement for Chinese cities (hosted by Taiwan, but seems to have directors in China participating). I think it hosts the Six Rainbow Cities Project (六城彩虹) that I mentioned in the film section. Like Gagaoolala, they have interviews with out people on their Youtube channel. They’re calling on directors in Hong Kong, Singapore, Taipei, etc. Their Youtube channel is here.

[English] My Dear Queer This podcast is hosted in Kaohsiung by two expats, Bertus and Emmanuel discussing Taiwan’s gay culture and often in comparison to other places in the world or their own experiences elsewhere.

[Mandarin] 笨瓜秀 pourquoi Admittedly, I don’t understand everything, but I like listening to it. The host interviews people on a variety of topics, including latest news such as using the gay bar in Taipei for Dream of the Red Chamber 紅樓夢, which is the contemporary remake of a classic Ching Dynasty novel. He also seems to like playing Japanese songs between sections of his podcast.

[English] Ghost Island Media Ghost Island Media produces a number of English-language podcasts about Taiwan and queer content is litered throughout. It’s co-founded by Emily Y. Wu 吳怡慈, Cathy Hsu 許蓓真. As a start, you can try Taiwan Take’s interviews with Jennifer Lu on LGB+ Equality and Audrey Tang. The episode from Metalhead Politics on Systematic Oppression is also a great critical discussion on the state of social conditions in Taiwan.

There’s a lot of content if you punch in queer-related search terms in Taiwan. You can search by city if you are looking for groups or events to attend. I’m including some larger platforms (that have English) or sites that have media content to share and a few Facebook groups for queer women. I’m sure there are a lot more and if you know a good one to share, please message me.

GaGaooLala (Chinese / English) GaGaooLala is the umbrella that emcompasses websites and channels for GagaTai and LalaTai. Gagaoolala 找尋你的故事 is the Facebook page that provides news updates and interview stories. In addition, they have pretty well maintained websites GagaTai 嘎嘎台 & LalaTai 拉拉台, for men and women respectively, which have a lot of gay and lesbian related content, including out people in Taiwan. The websites have an English version so I do highly recommend visitors check them out.

Ketagalan Media (Chinese / English) Ketagalan is also a media platform with an English site. It’s not LGBT exclusive and instead has politics, society, and innovation, culture and lifestyle as well. Ketagalan is named after the Austronesian Aboriginals who are native to Taiwan (before the Chinese occupied) and the website is an offshoot of the podcast project, which stopped in 2014, have more Taiwan news and commentary for a global English audience. One relevant piece is 10 LGBTI Destinations in Taiwan.

【女】拉子社區→Rainbow sky (Chinese) Les趣事分享 is the Facebook page for the site 阿什博客, which is basically is a stream of links for lesbian and other LGBT content. I didn’t create an account on there, but I think if you do, you can upvote content.

她 X 她 (She x She) They originally had a Livehouse channel, but it’s no longer active. The Facebook page has updates every few months.

BitheWay (Chinese) As the name suggests, it’s a basic Chinese resource for bisexuals. I think they have regular events and get togethers.

As a random piece of content, this is an interview of the Singaporean photographer Leslie Kee, who did Out In Japan, was invited by his home country to do Out in Singapore, Out in Taiwan as his third project. This is an English video explaining the project: Out People│同志攝影師Leslie Kee：拍下閃亮姿態，化為出櫃勇氣