This post was originally posted on my old blog in October 2018. Where possible, I’ll try to add more updated stuff I come across or feel free to DM me on Twitter if you have a link to share.

This post is part of my LGBTQ podcasts & media series for Taiwan, Hong Kong, China, Japan, and Asian Americans. This Hong Kong post covers podcasts, vlogs and Youtube channels, most of which are in Cantonese and meant to help locals find good content. This post is also useful for queer Asian Americans / Canadians with roots in Hong Kong and want to keep a dose of Canto in their lives while staying updated with the local culture. A tip from this CBC: the videos are better to start as the radio hosts talk really fast! 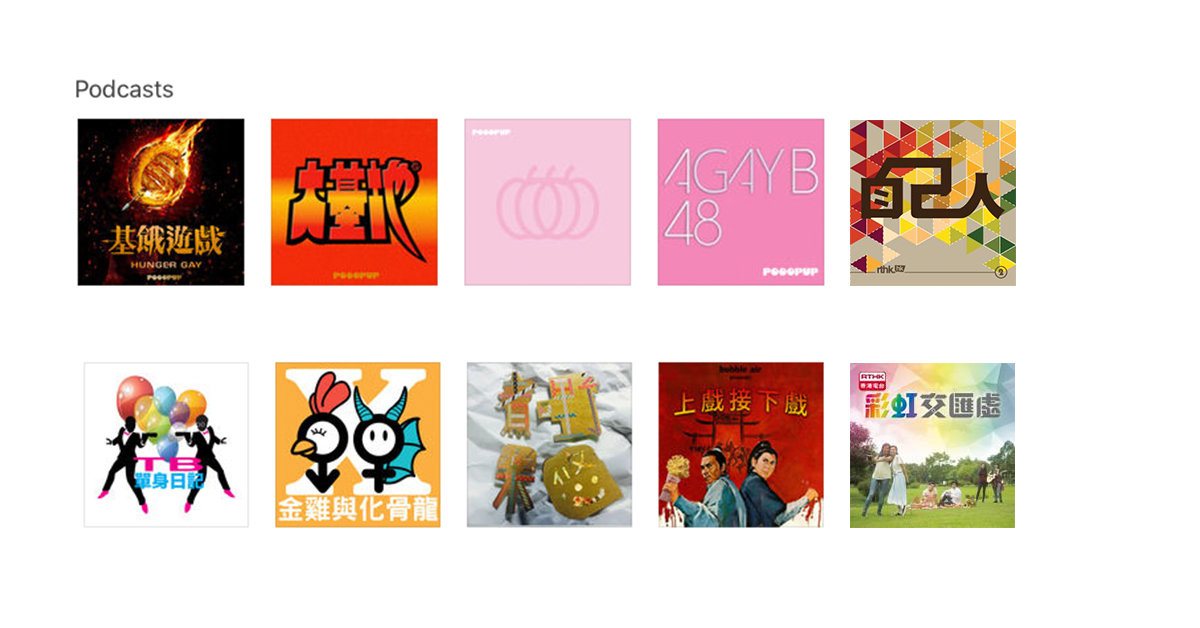 I’m not much of a Youtube watcher, but I did have a look at the Youtube channels for Hong Kong vloggers before putting them on this list. All of them are in Cantonese, though GDotTV has some English-subtitled videos as well. There is some trans (跨性別) content in addition to the dominant gay and lesbian ones, but of course there could always be more.

Founded in 2008, GDotTV is Hong Kong’s longest-running LGBTQ channel and media platform. It covers the full rainbow spectrum including the less represented groups such as transgender, non-binary, and intersex individuals in the community. Their videos includes events, interviews with out media celebrities, and original film shorts.

The BubbleAir videos are more female focused. There are video versions of the podcasts that I’ve listed below and it could include personal stories (She She 無限) that have been shared on video, a talkshow hosted by queer women (TB單打日記), street interviews in different districts (泡泡街訪). The Youtube channel has more content than iTunes.

This is one of the English videos: Benita Chick interviews Gian, a gay Filpino man.

**A lifestyle vlog hosted by the couple Ming and Ashley.

I want to say the PrideLab content tends to have videos that cover political issues or public opinion on topics such as same-sex marriage in Hong Kong, but it’s not just limited to that. They have informational/tips on local queer culture (同志常識知多啲) Q&A videos, LGBTQ activism history (香港同志運動口述歷史), fitness (Keep Fit 運動日日操), and Hong Kong covering Prides around the world (向世界出發：各地同志攻略). PrideLabHK does more than just videos. They also do designs and support initiatives in the LGBTQ community, which you can find on their website.

Hong Kong LGBTQ Podcast / radio content is chiefly produced by three media groups: RTHK (the public radio service with various channels), BubbleAir, and Pooopup Online Radio. RTHK tends to approach the topic from a news, political discussion, or social trends angle. As a general classification, BubbleAir content is mostly lesbian while Pooopup Online Radio is…basically all gay men. There are some exceptions or sometimes the hosts veer into topics such as bisexuality, but it’s a an easier way to classify the two. All the shows below are in Cantonese unless there is English marked.

**自己人 We are Family on RTHK (2018) **This show is on RTHK’s Radio 2, hosted by Brian Leung (梁兆輝) and I think aims to be a platform to discuss LGBTQ issues, though it doesn’t explicitly say so (the Chinese description is 多元性向文化平台). From the snippets that I’ve listened to, the talk show could cover everything from global LGBTQ issues (such as Romania’s same-sex marriage) to a Carrie Lam’s 2018 October address that basically closed the door on same-sex marriage in Hong Kong.

彩虹交匯處** Rainbow Crossroads by RTHK (2017 – 5 Episodes) **This is a 5-episode video mini-series that’s available on iTunes as a podcast. I think it covers 50 people who represent the sexual minorities in Hong Kong. Each episode covers a different cast of characters.

RTHK (select episodes) Hong Kong’s public radio, RTHK, occasionally covers topics such as same-sex marriage, transgender perspectives etc. The approach to the topics can vary depending on what the host channel actually is (such as 鏗鏘集), and please note the year of release as I think the language of discussion have changed from, say, 2010 to 2018. Below are some sample RTHK episodes:

BubbleAir does talk shows mostly for queer women and is still active on Youtube even though the podcasts are dated to 2016. The website is maintained and has new episodes uploaded for each series every week or so. In addition the the iTunes podcasts that are available, they have regular updates for the following series:上戲接下戲, 瘋戀我吧, 染後感, 泡泡街訪, TB 單打日記, SHE SHE 無限 JAM, Ben庶基地. The Facebook group is also well maintained.

上戲接下戲 (2015) Three episodes on TB (tomboys/butches) commentary on movies, music and travel. The latest episodes can be found on their website.

金雞與化骨龍** (2014-2016) **The talks show discusses everything from movies to travel food diaries to landmarks such as Propaganda (the LGBTQ-friendly bar in Central).

From what I have sampled, these shows have hosts who talk about everything, though there’s a lot of interesting (?) details about local gay culture such saunas, sex parties, sex toys, and attitudes towards dating. The latter I would liken to basically sitting in on a hangout by a bunch of gay guys who exchange sex lives and tips. It’s a bit difficult for me to explain the difference between the shows because the hosts’ tones may be different, none of the episodes really stood out. Of course, as a queer woman, I’m biased.

大基地 GayLand (2017) Also uploaded by Pooopup Online Radio. My understanding is that it’s a re-upload of radio episodes between 2009 – 2010 discussing all topics gay-lifestyle related (from Gay travel to relationships to masterbation).

基餓遊戲 Hunger Gay (2014-17) As the name suggests, it’s basically gay guys talking about topics relevant to them. I think it’s a good source of local attitudes, but here’s a warning that there are many comments that some people could find offensive or discriminatory. Their Facebook page is still active.

A基B48 (2012-13) This seems to be a mini discussion series on things like gay sex toys and coming out.

Hocc—菇武門 I’m including a podcast by Denise Ho, known by the stage name HOCC 何韻詩. The podcast acts more like a diary of whatever she wants to talk about, but is mostly related to her music instead of her LGBTQ activism. She’s fluent in English, but since she performs in East Asia now, the content available is mostly Cantonese and Mandarin if she is performing in Taiwan. She is one of the co-founders of Big Love Alliance in Hong Kong.

每週同志新聞報導 EKHome (2006) This is a pretty dated radio series, as it was around from 2006-7. It’s been uploaded back onto Youtube for posterity.

I will try to add in the feature films section for Hong Kong later when I have time! For now, enjoy!