This is an archived post from an old blog. If you want to see the event photos, head over to the page preserved in the web archives. 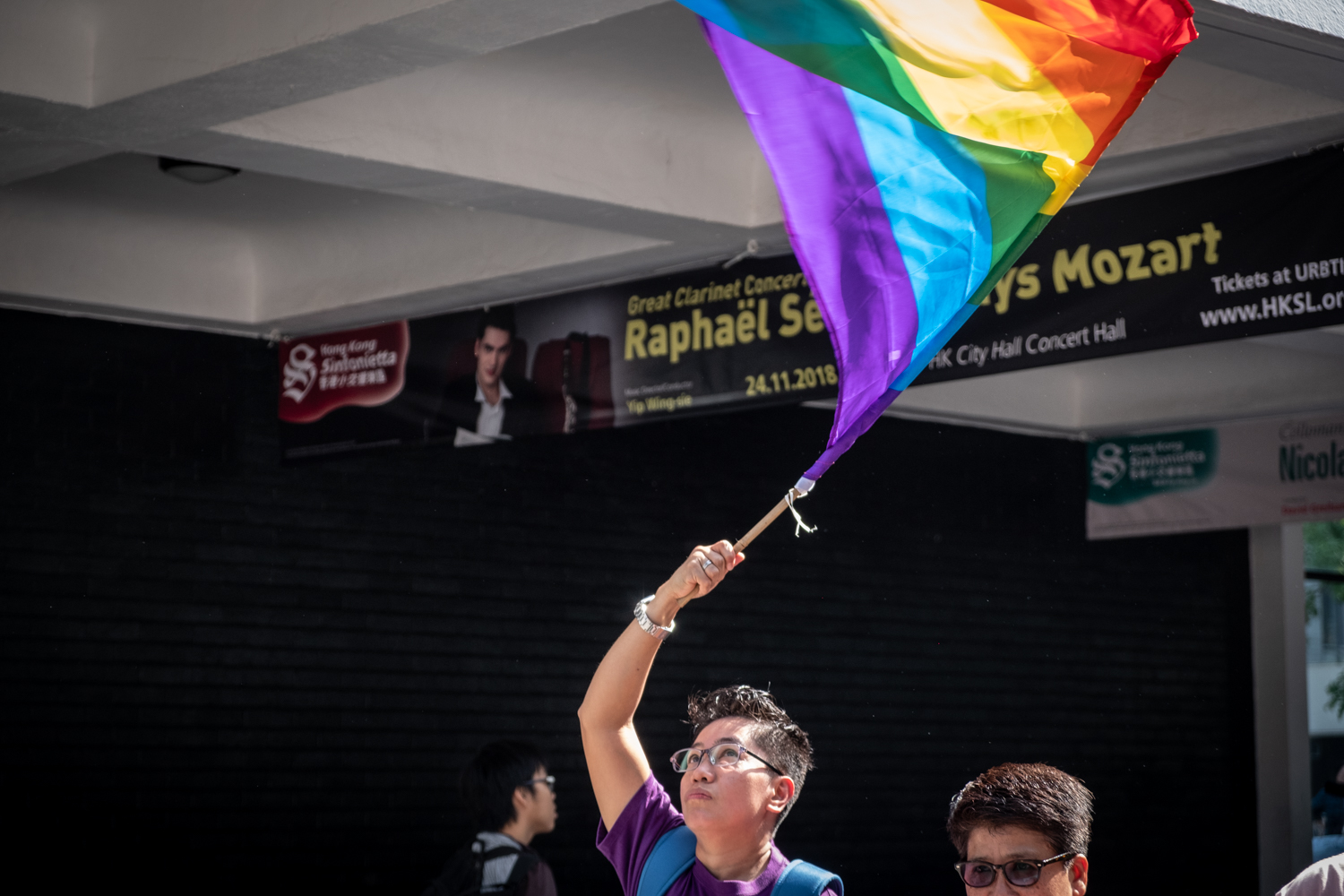 The Asia Pacific region’s LGBTQ community has seen great strides and setbacks in the past few years. In Hong Kong alone, one month after Hong Kong’s courts made a landmark ruling granting spousal visas for same-sex partners married in other countries, the Chief Executive Carrie Lam stated in the HKSAR Government’s Article 251 of the Chief Executiv’e 2018 Policy Address stating that, “The HKSAR Government has been committed to promoting equal opportunities for people of different sexual orientations and transgenders on the basis of upholding the existing institution of monogamy and heterosexual marriage” (emphasis added). In summary, spousal privileges are extended to expatriates in Hong Kong, not locals nor migrant workers from Asian countries without same-sex marriage laws.

There is much to celebrate and even more to continue fighting for. This reality is even more stark for the migrant workers who make up over half a million of Hong Kong’s labour force. The vast majority are domestic workers, of which Filipinos and Indonesians made up 184,081 and 153,299 respectively, according to the Hong Kong SAR Government’s Race Relations Unit.

The day after Hong Kong Pride, held on a Saturday when most Filipino helpers would have had to work, a coalition of LGBT+ migrant workers organized their 4th Migrants Pride Hong Kong. On Sunday, November 18, the marchers made their way through Central, where their peers were spending their day off.

Organized by LGBT communities from various nationalities, the march began at Edinburgh Place (City Hall) and went through major landmarks for the Filipino community in Central before ending at the venue for the main program at Chater Road. Participants chanted slogans to greet the groups who were eating, playing cards, and chilling on cardboard mats they set up for the day. Every Sunday, Central undergoes a transformation from being Hong Kong’s financial heart filled with business suits to a bustling hub for Southeast Asians to do everything from chill and stream videos or run their side businesses as pop up shops and food stalls.

This fourth annual march was organized by a coalition of groups:

Unfortunately, I was not able to find English information or links for all the organizers or the list of all attending organizations, but I did find the Filipino Migrant Workers’ Union, Samahang Migrante HongKong, and Friends of Bethune House Hong Kong.

The population of ethnic minorities in Hong Kong has increased 70% in a decade, rising to over 584,000 people, according Hong Kong’s 2016 by-census. Many migrant workers in Hong Kong are domestic helpers, whose work contracts state that they must find employment within 2 weeks of termination with their current employer, which offers little protection from deportation if they report abuse by employers. As such, the needs of LGBT migrant workers are not the same as the items advocated for in the city’s other large diversity events such as Pink Season, Pink Dot, or Hong Kong Pride, which are organized by expatriates and Chinese locals.

Migrants Pride 2018 was also attended by supporting organizations and individuals from Hong Kong’s local NGOs as well as a contingent from Taiwan. Local Hong Kong organizations, such as Amnesty International’s LGBTI group, and the Association for Advancement of Feminism (AAF), also marched in solidarity with the migrant workers. One woman also acted as a translator for Mandarin and Cantonese speaking attendees in preparation to march.

Despite only having one day off a week, many of these LGBT community organizers have attended other diversity and inclusion events outside of this march. For example, I had see Bethune House at the Pink Season CultureFest a few weeks earlier. Gabriela Hong Kong, one of the organizers for Migrants’ Pride, also participated in Pink Dot 2018  and Hong Kong Pride 2018 in solidarity with the city’s wider community celebrations.

The rest of the photos below follow the parade group as it went through the various check points in Central.

I’ve included as many photos as possible here because it is an honour and privilege to be welcomed into their space and event. Many locals, even supportive allies, may not have considered that though the migrant community could do with a lot more support, those of us outside the community should nonetheless solicit their permission first. I asked some of the organizers before taking photos and I think other attendees saw me asking, so everyone was far more relaxed as I wasn’t just a passerby who took a few snaps of strangers.

The photos fall into two general categories: capturing the dignity and force of a movement, and preserving warmth of camaraderie and community. In addition to the people who marched bravely, there are those who worked tirelessly behind the scenes to ensure that the protest could proceed smoothly. I cannot imagine the amount of logistics involved to arrange a date, prepare an itinerary, send invitations, and perhaps negotiate with police on the route because Hong Kong’s Public Order Ordinance requires the Commissioner of Police to be notified of the intention of a meeting over 50 persons. [Further restrictions on public gatherings have occured ever since the 2019 Hong Kong protests.]

The various groups that attended came in colour-coordinated clothes for each of their section to make up the rainbow.

Just before setting out, Nick, one of the group leaders rallied the marchers with several slogans. It was quite fun for me to just listen as Nick spoke in Tagalog to community members to convey the messages. I also watched as one of the marchers responded with the enthusiasm necessary to affect the rest of the excited, but chatting, groups.

Some attendees may have felt that the turn-out was relatively small, especially compared to corporate-financed celebrations like Pink Dot, which took place several weekends earlier. But that is how protests often begin: with brave and tenacious individuals who are willing to risk being visible targets by occupying the spaces they deserve, both physically and in public discourses. Bravery only emerges through exposure and vulnerability, and it is a privilege to bear witness to that.

I’d also like to acknowledge the ambiance of the march. It was equal parts protesting and celebration. They were protesting for labour rights in Hong Kong, as well as acknowledgement in their homelands, such as the Philippines. At the same time, they were celebrating being together, without fear of public violence and persecution that I think to some degree still plagues many North American Prides with Stonewall legacies and general public violence. I think the protesters felt, for the most part comfortable going through their community in Central as one of the various groups and activities that were happening that day.

In fact, I saw something in the march that I’ve not seen in other Prides. One of the lead marchers, Bunso, sang into the microphone and the group broke out in song as we walked through a tunnel. I think at some point, some of the other Filipinos who were sitting and hanging out also started singing, too. Using this shared cultural language to connect to their peers was not only effective, but touching.

Once we emerged from the tunnel, we ran into the HSBC Community Festival, which I was disappointed to find taking up a central spot on the same day. HSBC had done a lot for diversity and inclusion movements, from sponsoring LGBT+ events, to inclusive benefits, to being the first bank in Hong Kong to work around all the legal issues to offer life insurance for same-sex partners as a product. I hope next year they plan their schedule a bit better to not compete for attention in public spaces on the same day as migrant workers and LGBT+ causes.

I was also heartened to find that some local folks were interviewing the marchers! I don’t know why, but I’m glad there was interest, as there was no local media interest or coverage. In contrast, the mainstream media reported on Pink Season, Pink Dot, and Hong Kong Pride this year.

Banners and decorations at the performance area were set up to greet the marchers as the march came to an end. Baneng was one of the MCs who greeted them and the organizers in turn welcomed all the organizations who took place. One of the benefits of being grassroots is that everyone can still fit to hear and watch everything that’s going on!

One last thought I wanted to leave off on was solidarity. Migrants Pride was born out of exclusion — the exclusion that individuals face as either LGBT+, an ethnic minority, and migrant worker, or all the above in a Han Chinese and expatriate controlled society. Hong Kong is still an incredibly discriminatory society for class, racial, gender, and sexual orientation. All the allies who did come were respectful and showed support with deference to the event. There were people from Taiwan who had come to support not only Hong Kong Pride, but Migrants Pride as well. LGBT+ migrants took the high road and welcomed allies (Chinese and expats) with grace.

For all the human rights hurdles and political squabbles in the Asia Pacific region, it’s everyday people who show that we can come together, irrespective of our communities and nationalities, to show compassion and solidarity for each other. A huge thanks to the migrant organizers from the Philippines, Indonesia, and Nepal who made this happen and set an example that Hong Kong can learn from.