This is an archive post covering Hong Kong Pride Parade 2017.

Hong Kong’s 8th Pride Parade undoubtedly contributed to cleaner air for a good few hours this past Sunday as 10,000 marchers worked their way from Causeway Bay to Central. And, as you can see from my favourite photo above, the event was pretty family friendly. Hong Kong’s LGBTQ events may be a modest size compared to ones like Toronto, Vancouver, New York, San Fran, and even Taipei’s, but I look forward to this event whenever I am in town. 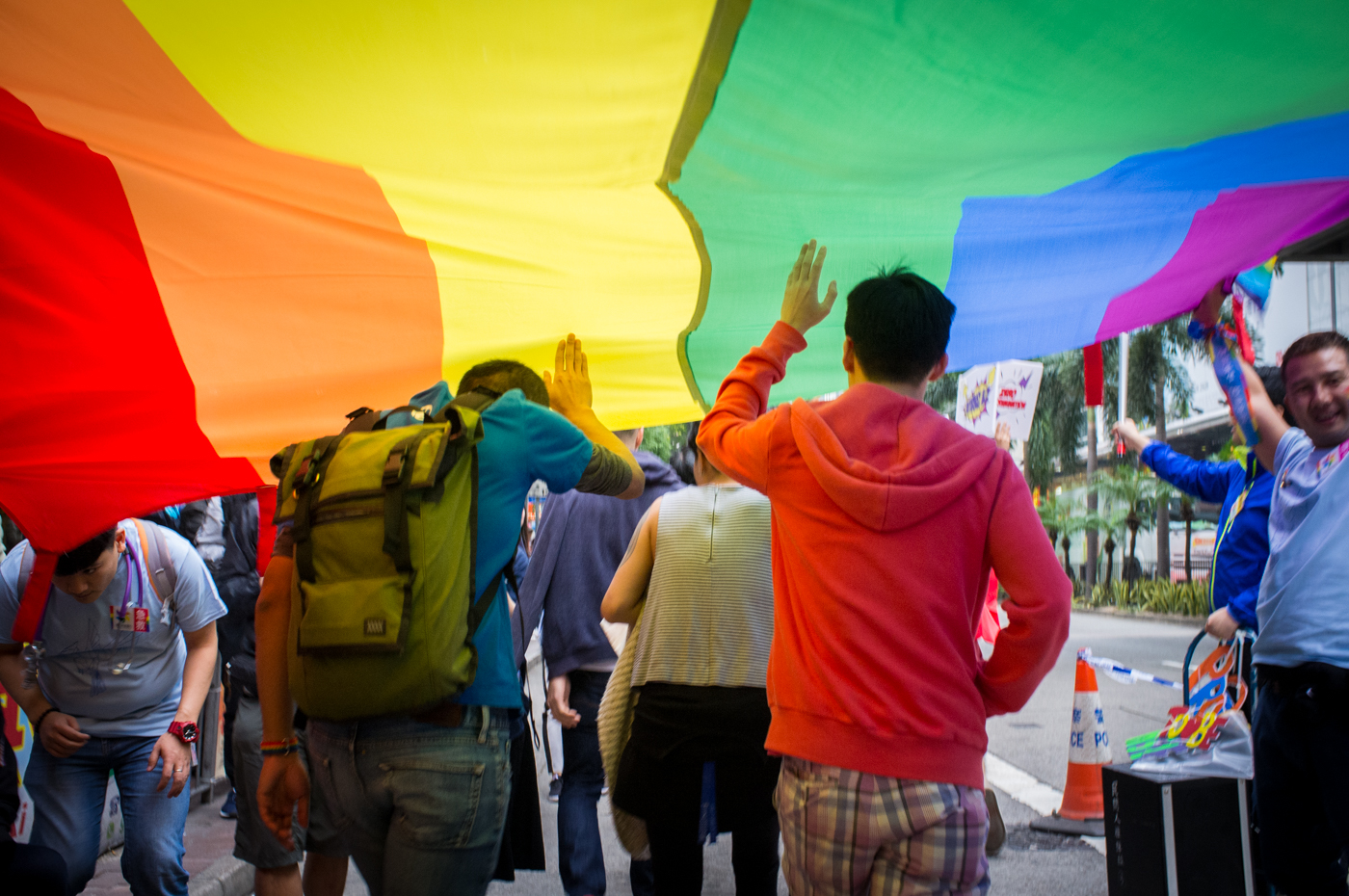 The first plus is that it took me a mere 10 minutes to find the group that invited me to march with them: Planet Ally at the Victoria Park rally point. The group is headquartered in Hong Kong by virtue of its organizers and it connects LGBTQ communities and activists around the world. And I can attest to its genuine inclusion beyond the usual “gay and lesbian plus the rest” approach (check their presenters at the Human Dignity Festival to get a sense of what I mean. I opted to carry my camera in my two hands instead of the awesome comic-style signs.

Bess, the superhero organizer who brought the suitcase of costumes and props for us, deserves special mention.

The hugs and celebrations are in some ways a festive pause against the backdrop of an ongoing public consultation on the legal recognition of transgender and intersex individuals (albeit ironic given it’s a protest). However, there is also much to celebrate: the successful bid to host the 2022 Gay Games, the world’s largest LGBT sporting event, for one!

After the opening speeches, the Parade began promptly at 2pm and we followed the current of people who worked out onto the main road. Can you see the flag? We had a huge crowd of friends from Taiwan! As a side note for friends from abroad, Taipei has Asia’s largest Pride Parade.

The best thing was that I could step out at any point to take photos of the energetic crowds.

I brought a local friend along who educated me on why everyone was wearing blue (despite it being his first Hong Kong Pride). We somehow ended up with this group of Taiwanese marchers because the groups were so fluid and no one minded who dropped in or out.

The march is quite flat, literally. Unlike the massive productions in North America, Hong Kong’s Parade is still a pedestrian event. I’ll be the first to admit, I like eye candy, but I like this down-to-earth take as well. It is in this flat mix that the diverse LGBTQ community members mingled and rubbed shoulders unwittingly, whether it was differently abled, elderly, someone with an asexual sign, trans, or those who wore their faiths on their sleeve.

In addition to that much-needed externality of exhaust-free air was another oddity in this workaholic city: a steady stream of grins and laughter slowly working its way through a traffic-free side of Hennessy Road, the Island’s main artery through these commercial districts. The LGBTQ community in Hong Kong has grown comfortable with this annual public civil protest. The individuals feed on the strength of community crowd they see only a few times a year (the other one being Pink Season and Pink Dot).

Perhaps some people want Pride to be a show stopper — to demand that the entire road is sealed to accommodate the masses. I’m quite happy with the current arrangement. People still need to get things done, and being able to cross the road helps that happen. And moreover, the trams that still run are bringing a steady stream of viewers!

I have a habit of scanning faces, maybe because I have been an event organizer in various capacities for over a decade. My lips naturally curl up when people unabashedly hug and laugh with unfettered delight. But my eyes naturally settle on individuals on the fringes or solo in the crowd. What I enjoy most about Pride, from Toronto to Tokyo, is seeing the wonder on their faces. Even the most poker-faced ones have eyes that betray their emotions.

No matter how Pride manifests around the world, it is ultimately about the people. As much as it is about advocating for rights for a better tomorrow, joining or seeing this crowd out proud and out people is about feeling how good things can be now, at least for one day.

Despite being pretty inactive in the LGBTQ community in Hong Kong, I can be sure to run into and meet new friends just by showing up. Everyone knows it’ll be a bit chaotic, so providing a heads up that you will be there at a rough time is enough. The rest, organically unfolds, like stumbling upon the friends you thought were behind you on the sidewalk. *Round of hugs!*

Also, on what other occasion in Hong Kong would you see two people standing on the fence MCing and greeting groups? I have no idea who the MCs were, but they were doing a lovely job.

Unlike Toronto or Vancouver, where the month-long events would be in your face whether you were looking at a billboard, subway sign, or your mobile, I would have missed it altogether if I had archived my friend’s event invite on Facebook. Hong Kong’s Pride Parade wasn’t too advertised, but it drew a rainbow crowd no-one in Causeway Bay through Admiralty could miss.

But one of the interesting things about Hong Kong’s LGBTQ community is that, as a relatively young event (if we use the Pride Parade as a marker), it comes with a cosmopolitan mix. The friends that I brought along had been to Pride in other cities like San Francisco or Sydney. I ended up comparing Pride Toronto with someone I just met (who was visiting from Toronto). People have reference points to other places, whether through experience or exchanges with other organizers in Asia or other regions. I feel like this somehow creates a meeting point between Hong Kong’s Cantonese and English speaking communities, which are often quite separate (why I don’t know — it’s just a gut feeling).

I ended up messaging queer friend I didn’t see that day late at night. We had both been to Toronto’s Pride, which is one of the world’s largest, and a spectacle on another league with its 3-5 hour main march that shuts down downtown to celebrate. Being able to enjoy Toronto’s Pride as part of that local LGBTQ community is a privilege I am grateful for. But I am equally grateful to be a part of this Hong Kong community and for the opportunity to show my local friends what their home has to offer them for the first time.