This is an archive post from my deleted blog.

This weekend trip to the Kunisaki Penninsula, in Oita Prefecture, Kyushu was an impulsive gift to myself before my birthday. ANA has an Explore Japan special flight offer to Kyushu in support of the region since the 2016 spring Kumamoto earthquake. The round trip flight just a little bit over a round-trip bus fair to Kyoto! 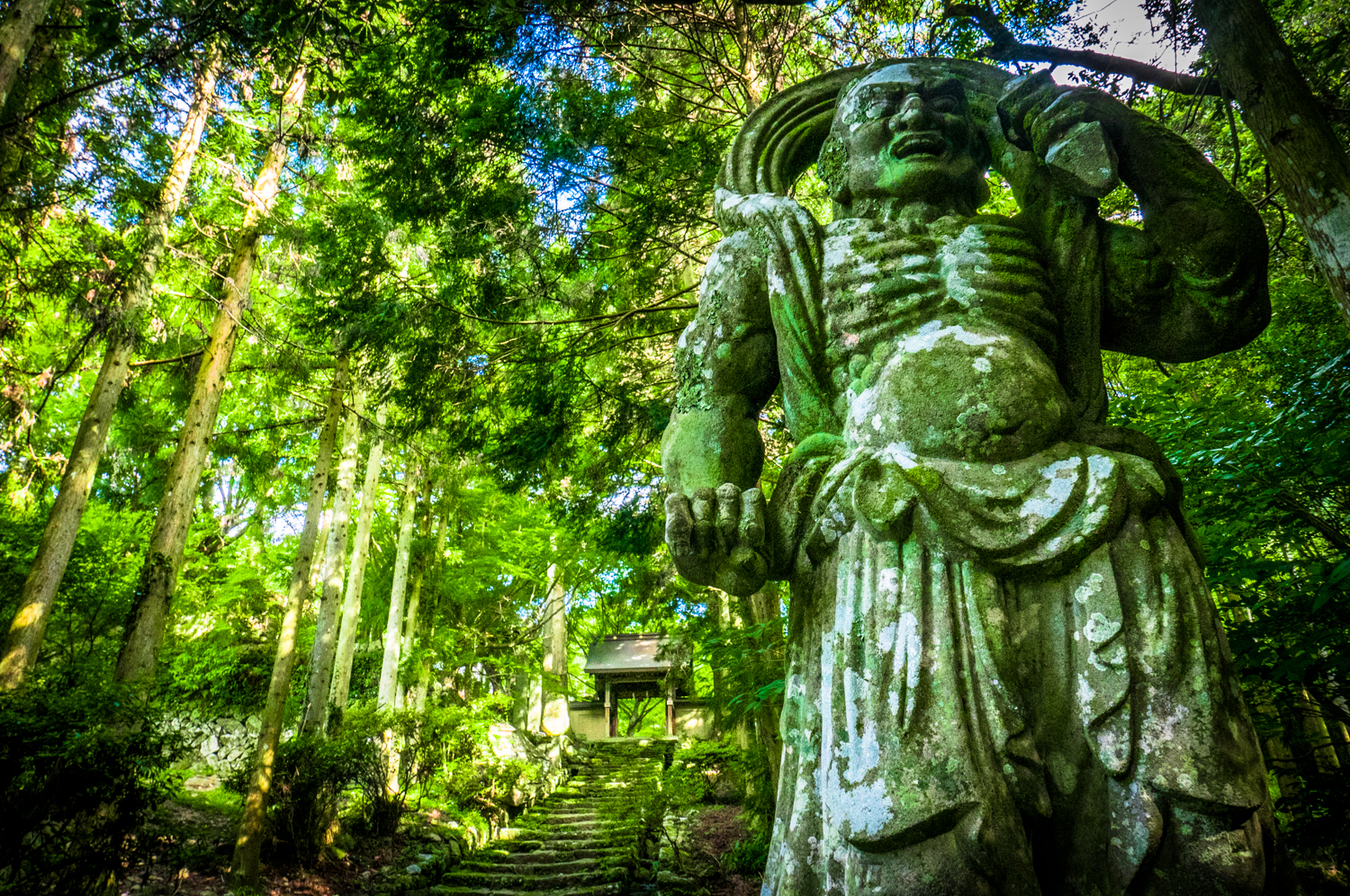 I’ll post up diary entries of my walking trip soon! These comments below are cursory notes and my random commentary to keep you entertained.

Kunisaki Peninsula (国東半島) sticks out of south-eastern Kyushu. The train line skirt along its perimeter and cuts down to popular Beppu (the famous red onsen town). However, the region wasn’t always like this. At the centre of this circular peninsula is Mount Futago, which rises to a modest 700 metres above sea level. The hills wind their way over, and between them the fertile valleys have been home to many a small village for centuries.

Kunisaki, it turns out, has a plethora of Buddhist temples and shrines. Some of them, like Fuki-ji, were built by the illustrious Fujiwara Clan that controlled the Heian Imperial Court. Many of these modestly-sized shrines house historical works of art, artifacts, Heian-Era statues, or are even national treasures themselves. Many of the temples are associated with Ninmon, a Nara Period monk who founded 28 temples on Kunisaki in the 8th century. The peninsula flourished as a place of Shugendo training as well. The region has gone through turbulent times, when temples fell out of favour and were systematically destroyed. The Kunisaki Pilgrimage has reportedly endured for close to a thousand years. Mysteriously, it died out in the 1960s, despite the introduction of bus pilgrimage tours. Now, there is one major walking pilgrimage every 10 years.

Walking Shikoku has gotten me a bit addicted to the contained walking and shoestring trips. Basically, I was looking for an excuse to walk. This is Japan; it is safe, the people are nice, there are vending machines. Nothing could go too wrong. With that, I bought a ticket and figured I’d sort out the rest after I arrived.

Upon arrival, I learned that even the Oita Airport, which is in Kunisaki itself, can’t be bothered to list out its local bus times; the only bus routes they showed were to cities outside the area. That meant I trotted off to my first temple at 8:30am fresh off the plane.

My first temple had a map of the historical premise, which sprawled over the little mountain. I was fascinated, so I followed the overgrown stairs up to find these first Nio statues. I continued following the overgrown paths up, and up, chased by a wasp whirling around me.

The top really didn’t have much. The shrine was clearly disused. The wash basin had stagnant water. The incense urn was covered in leaves. Yet, someone was keeping the flags neat and clean. As my first temple, it set the tone for what was to come. I was already behind schedule.

I thought Shikoku had nothing. Kunisaki didn’t even have convenience stores. Once I headed into the valleys, the only sources of calories were vending machines.

Moss and stone is a common refrain.

A kind monk showed me around and explained the various statues and paintings. Truth be told, I couldn’t catch everything he said, especially since he mixed it with some Kyushu dialect. But I got the gist!

I’d found the Kunisaki Long Trail map online, but it wasn’t clear enough to find the right roads in the network of mountain paths criss crossing everywhere. Still, I eventually stumbled upon the trail markers, which, sadly, lead to many unkept trails (still passable, but it’ll take you some time).

As someone who’s volunteered on farms, this is a sad sight. By August the rice fields should be golden and drooping. They’re still lush green long grasses, which is good for my eyes, but not for the farmers.

I lucked out and stumbled into the Baien Museum right when one of the ladies was getting off. She offered to drive me to the Baien no Sato, which is an onsen and has accommodations. By the evening, I’d not eaten a proper meal all day, so I was grateful to have somewhere to at least buy snacks. Even better, of course, that I could get cleaned up for ¥310 and then camp just outside!

One of the best things about camping is waking up to natural light. I never sleep well camping, so part of me can’t wait for dawn so I can stop trying to sleep.

Walking through the valley wasn’t so bad because the hills offered shade most of the route up.

Perhaps it was summer. Perhaps it’s Kunisaki. As usual, there were not too many visitors, which worked just fine for me. As the ‘head’ temple in the region, the complex is large and includes various shrines and temples. The back of the shrine leads to the peak of Mount Futago, where there should be a view of the sea.

I took my time there, and also took my time leaving. I was undecided about which side of the mountain to go down. It was 35-degree sunshine. I was perpetually drowned in sweat and worried I’d burn. I also didn’t have reception, so it made booking anywhere difficult. In the end, I hedged and decided to head to Kunisaki City.

At around 11:45am, I came across this golf course. One never know what Google Maps is actually mapping in these rural parts, but I poked my head in to see if I could get a drink and sit down to get an hour’s reprieve from the sun.

Not only did they have ice-cold drinks, I found the upstairs area was perfect for napping. Double score! I plugged my phone in to charge, gulped the local kabosu (citrus fruit) soda, and napped on the tatami mats for an hour. I was making up for the sleepless night before.

Even after the nap, walking at 1pm was basically going through an oven. I was glad to reach each temple, but they didn’t offer much so I moved on quickly. Unlike the Shikoku temples, many didn’t have an incense urn and instead had an open prayer hall.

I just need to say, as scenic as it was, and as short a climb as this should be, at 2pm, it felt like forever.

After this, I was done for the day. By then, I had reception, so I could ask my sister to help me phone up places to stay. On a good day – if I wasn’t dying of heat and probably lack of calories – the rest of the walk to Kunisaki City should only be 2 hours. I was pretty dead by then and determined to hitch a ride. I was fortuante enough to some 15 minutes after setting off. The kind oji-san dropped me off at the Kunisaki Tourist Information Centre when I told him I wasn’t sure where I’d stay.

As a result of that, I met the man who created the Long Trail Map, and his daughter designed Sakichi-kun, Kunisaki’s mascot! It turns out, Sakichi-kun was inspired by the Futago-ji Nio and is meant to mean ‘last’ (sa as a short for sai___) and ‘fortune’ (kichi).

By then, my sister managed to confirm a hotel I’d found 15 minutes away from this tourist centre. It was above my price point, but by then I was pretty sleep deprived and desperate. Plus, it was 15-minutes walk away. That factor alone made it good already.

One thing I like to do to mark special occasions is to see a good sunrise. Part of the point of this trip was so that I could work myself to exhaustion and enjoy going home to Tokyo to enjoy my birthday. This sunrise was spectacular from the 5th floor of the hotel.

These sweet potato cakes I’d picked up from the Michi-no-Eki beside the tourism office is the closest thing I’ve had to a proper meal in the pat 2 days. Either way, it was yum! Kyushu is known for its food, and after browsing their local options, I can see why!

In the end, I decided to enjoy my hotel room until check out time at 10am. I needed to remind myself that once in a while, it’s okay to not set off at 7am to walk again. Instead, I wrote postcards for friends and typed up reflections for my birthday. One of the reasons I want a quiet morning and like having my time alone before the day is to reflect, and I ended up having the perfect location to do it!

This one-hour walk to this last temple was murderous. I’d dropped my bag off in dark corner of the public library to lighten my load. It was lighter, but no less hot.

The lady (and the monk) who care for this temple came back just as I was leaving. She insisted on giving me a drink, then making me onigiri (rice balls). The warmest thing about temples is seeing that the people who care for them still have a comfortable environment to live in. This one certainly did, with is spacious tatami rooms and modern kitchen facilities. Even though it was still going through slow repair, the place felt warm and homey.