This is an archive post from my deleted blog.

This is part of a 3-part series on the Dewa Sanzan which includes 3 diary entries and travel information. 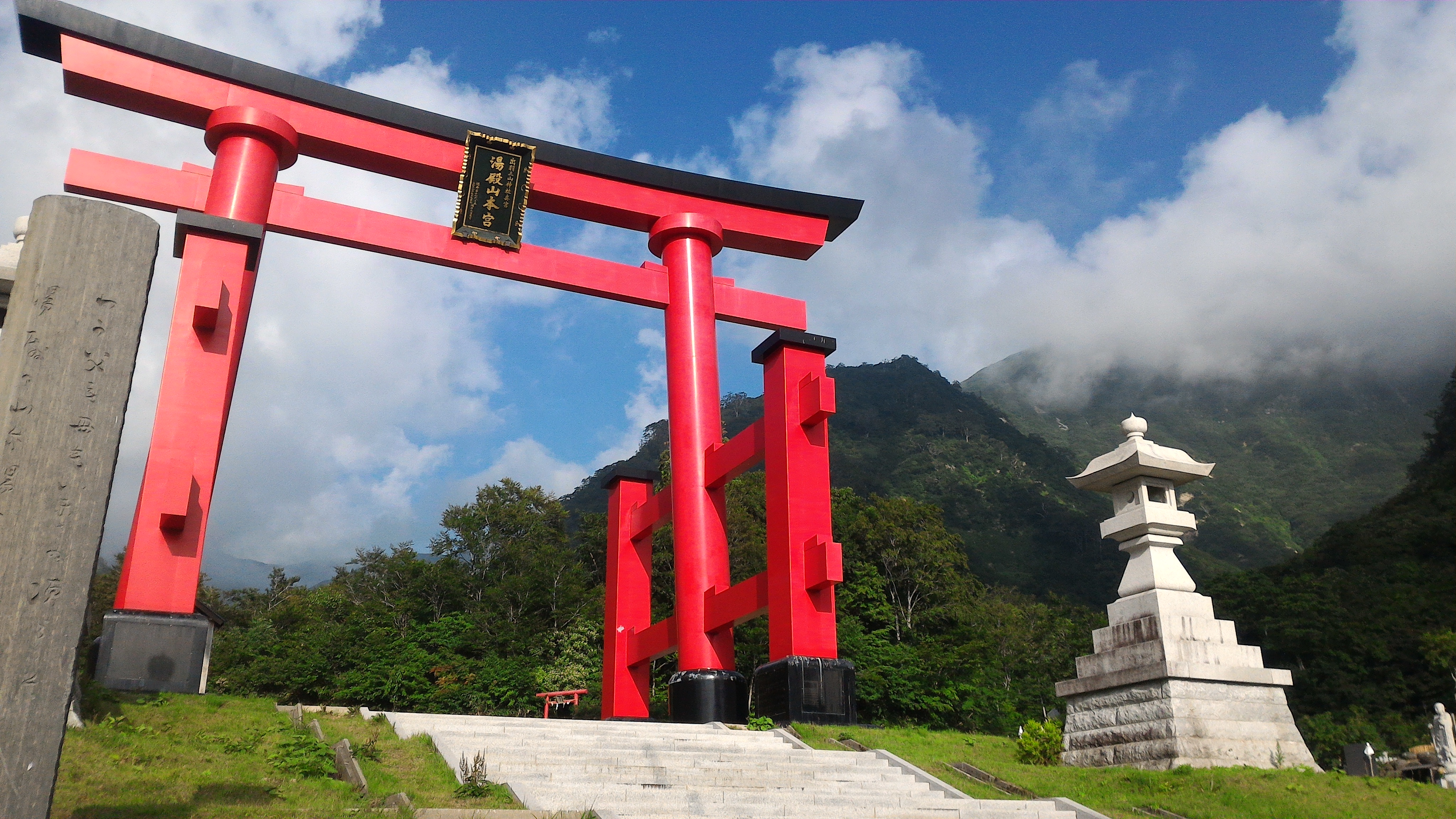 I follow the trekkers down a precipitous slope. It has busy traffic, but the mountain can accommodate us all. The sheer path is made entirely of loose rocks on dry dirt.

I’m wary. I rolled my left ankle, yet again, on my way up Gassan. Rocks and dirt, the most harmonious path with nature is also the most dangerous for bad feet. I shouldn’t be doing this. There’s already pain in my ankle. I use my staves as feet down to avoid the pain in my knees. I inch. Everyone, the numerous elderly included, pass me. I smile and greet them in turn. I admire them. I hope they are as happy as I am just to be here.

‘Ganbattekudasai!’ a boy-scout voice pipes from above.

There’s a ripple of chuckles. This repeats every few seconds until a 12 year-old sends me the same encouragement. I watch him skip from bolder to bolder and deftly step over rocks that roll after his foot has lifted. How I’ve forgotten that sure-footedness. How good it is to be young!

For all the worries we develop as adults, I wonder how many cultivate the wisdom that can only come with time as well.

In the end, I spend an hour going down this slope that would have no problem charging up in 15 minutes. Still, it is an hour with the breathtaking valleys, carved out by a sliver of a river on one side and languid bowls left by the last ice age’s glaciers on the other. I look back up at my harrowing trial to get one last look at Gassan’s peak, from where I saw this trail earlier. The holy clouds have already reclaimed that corner.

I continue on a stone-slab path that has knawed-out holes from snow storms and monsoon rains.

No matter how slow, how good it is to have a pair of legs that gets me by.

Despite the bustling traffic only minutes away, the route down to Yudono Shrine has few visitors. The boy must have gone back to Satsu at this last fork. From there, he and the other trekkers can take a gondola down the mountain and drive home.

This last part has much more dirt, which is a boon for my feet. The path initially follows along the hillside before circling into another valley. It looks as if it’s been cleared by bushwhackers and dug out by adventurers. Unlike the one on Gassan, this route was not made by the devout ascetic creating a path to the spiritual world. This was made by those who’d forgotten the world altogether, aspiring to go nowhere in particular, and therefore leaving nothing in particular behind. The route seems like an afterthought.

The silence here is resounding. It is so thick the chirping birds, trickling stream, and ripple of leaves do not pierce it. It devours them all. It is a bit unnerving. I stop often, looking behind me. It is the perfect, blazing sunny afternoon, but the silence has possessed my shadow.

Despite the clear signage at the fork between the Satsu gondola and Yudono-san’s shrine, I doubt myself. I am relieved to finally reach the rest hut that I’d read about in a route description. At least I’m on the right track. I look inside the locked building, with its abandoned sink, bedframe, and other bits and bobs. It has an outhouse toilet. Since Yudono-san’s shrine is in a valley, this is my closest view of the peak. It looks close, it’s true distance hidden by the gradual ascent.

From here, it’s straight down. The path is soon covered by a low canopy, shielding me from the afternoon sun. At a clearing, I can see a small structure poking out of the dense green valley. I relax a little: at least it’s in sight – or something is in sight.

Then, I smell ferns, the low curly bushes – the ones in the undergrowth across the Pacific. Then, comes a sound distinct to this Asian side: the cascade of cicadas.

I continue down the windy, sharp turns, down the chain ladders sitting on 90-degree inclines. I finally encounter another hiker, who patiently follows me. Once there is a foothold, I step aside and let him pass. He quickly disappears.

After the ladders, the path goes along a stream. Then, the stream becomes the path. There is no other way down. Finally, the stream joins a river, which then goes to a dam.

Civilization, even if the fringes, is a relief. Only the adrenaline is numbing the pain on my trembling knees and aching left ankle. What would I have done without my two walking staves? I don’t even want to think about it.

I cross the stream and follow the dirt path that’s re-emerged along the river. There’s one bend with a view of a waterfall. The echoing roar and the afternoon sunlight hitting the cascade creates a spine-tingling awe. Surely enough, it is marked by a shimenawa, a holy rope that marks yorishiro, an object capable of attracting spirits.

I enter Yudono shrine via the back entrance, pay the fee, and go through. It is also a small shrine, but where Gassan was austere, this one is tinged with a little magic. Yudono-san’s shrine is also the most secretive, and visitors are not meant to discuss what they saw. There is, however, a hot footbath to soak in after the long hike just outside!

After that, I return to modernity. I walk to the parking lot, wait for the shuttle bus taking me to the massive torii gate that sits at the mouth of the valley and marks the beginning of Yudono’s sacred grounds. I check out the visitor centre items while waiting for the bus that will take me out of the mountains to Tsuruoka.

Through a combination of bus and train, I will be transported hundreds of miles south again. By nightfall, I will be in the capital of an entirely different prefecture: Niigata.

It was August 7. I checked into a budget business hotel in Niigata City after dark. Tomorrow, I will head to Shibu Onsen and treat myself for finishing my long treks.

Only a day ago, I’d taken almost the exact same train up north. Now, I am being hurled at over a hundred miles an hour down the western coast of Japan.

The sky and sea are as calm as yesterday. However today, I am watching golden hour unfold. The ocean remains as inscrutable blue as ever. The sky, dotted with a splash of cloud here and there, is not as fierce as yesterday. The royal blue mellows into magenta. As the sun hovers like a perfectly golden yolk. Its saturated colours fan out into soft orange brush strokes above the opaque sea below.

I mull over the three shrines and their characters. Haguro-san was by far the wealthiest and most visited since it houses the deities for all three mountains for year-round worship. The size and quality of craftsmanship is as impressive as temples in Nikko and Koya-san. Its wealth has brought prosperity to the village below as well. I appreciate it especially because of its pristine morning, with nothing but the rustle of the trees and the call of birds. I’m not sure how I’d feel about it arriving mid-day, with the cacophony of tour groups churning through.

The second, Gassan, I felt houses the spirit of Shugendo. Symbolically, it seems that one does have to wade past the grey bog to see the blue skies above. Yet, even at the peak, they chose, of all spots, the windiest, mistiest corner. On the surface, it seems a grey view of the world, but once one works past the apathetic natural forces hurling through, there’s an uncanny peace. The shrine may be a pile of rocks, but the true mark of achievement is the hundreds of thousands of rocks leading up to them that were placed to give us a road up. If we were really walking the path, then the form at the end does not matter. Being impressed no longer matters. What matters is that, for whatever reason, we were drawn here. What matters is that we arrived.

The last, Yudono-san, is the heart. Like Gassan, it is small. It is not much. It is not aloof. It is hidden, nestled in a valley easily missed amongst the thousands in this region. However, this Yudono’s Shrine is the holiest of the three. The holy has a dash of magic; just a little is enough.

While the three are so different in character, and the paths that mark them equally so, they work well as a trio. The first retains the majesty of human faith and dedication, an homage if nothing else to the heights that humanity can ascend. As to the other two: the strong and the wise have left spiritual peddling to others. The holy is that sense of wonder, gratitude, and mystery at the forgotten corners all around us, as powerful and fickle as the mountain, and as intense and nourishing as Japan’s hot springs.